On 20th September 2017 London Exec Apartments reached the landmark figure of 50 serviced apartments when it took on its latest Twickenham units after just over two years since forming.

The new Twickenham apartments are based in the prestigious Wharf House development, opposite Twickenham train station. The luxury apartments are set in beautifully landscaped gardens and features include balconies, 40mpbs Wifi, and integrated Smeg kitchen appliances.

Twickenham is just over a mile and a 3 minute train from Richmond upon Thames, and in many ways is just as attractive, with its picturesque riverside pubs and grand period mansions. In addition there’s Church Street -a lovely, flower-lined, village-style parade with lots of restaurants, sometimes closed to traffic for alfresco dining. 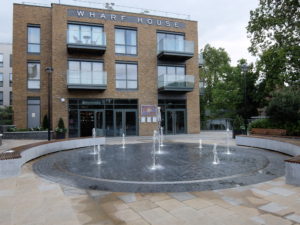 As well as being the home of Rugby Union, with the largest rugby stadium in the world, Twickenham is extremely well connected, both by road and train. It’s 4 miles to the M3 and 8 miles to Heathrow. By train direct, it’s 6 minutes to Feltham, 8 to Teddington, 10 to Hampton, 11 to Putney and Hounslow, 12 to Clapham Junction, Staines and Kingston upon Thames, 13 to Barnes, 14 to Sunbury, 17 to Isleworth and Egham, 21 to Shepperton and Brentford, 20 to Waterloo, 24 to Chiswick and Kew Bridge, 28 to Wimbledon and 31 to Windsor & Eton.