HomeNews: England v Spain in Wembley
londonapart
Uncategorized
No Comments
After getting to the semi-final of the World Cup, the strongest England squad in a long time is back to kick off their inaugural UEFA Nations League campaign with a home fixture at Wembley against Spain on Saturday 8th September.

England got much further than Spain in the World Cup, so it’ll be interesting to see if the Spanish team have pulled their socks up over the summer.
Wembley Stadium is the home of English football and is situated in North West London. Wembley Park has undergone a fantastic transformation into a lovely neighbourhood with iconic views, world class entertainment, and a plethora of popular shops, cafes, bars, restaurants and cinemas. The stadium is a minute’s walk from the London Designer Outlet; which is ideal for shopping sprees and eating out. 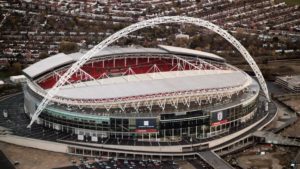